A Brief History of Turkey: Her Culture and Handicrafts

For five millennia the area of Asia Minor that we now call Turkey has played a central role in the economic, cultural and political life of both Europe and the Middle East. Originally known as Anatolia (meaning “the East” or “Sunrise”) the area was inhabited by tribes known as Hattians and Hurrians at least 44 centuries ago. These tribes were followed by the Hittites who ruled the area for some 700 years before their empire collapsed in about 1200 B.C.

In the wake of the Hittite collapse a variety of tribes vied for control of the area with none establishing absolute rule until the Persians invaded in the 6th Century B.C. Persian rule of Anatolia lasted until 335 BC when Alexander the Great invaded. Alexander introduced Greek language and culture to the area which had the effect of killing off the native Anatolian languages. In 190 B.C. the armies of the Roman Republic invaded and won the decisive Battle of Magnesia against local King Antiochus III. This victory effectively established Roman/Byzantine control of the area for the next 1,500 years.

In 1453 the Ottoman Turks conquered Constantinople marking a definitive end to the Eastern Roman, or Byzantine, empire. After less than 150 years however the Ottoman Empire began a long, inexorable slide into decadence and irrelevance, culminating with their disastrous loss in World War I. The Turks were not of a mind to accept the terms of surrender being offered them by the victorious allies however, and in 1922, led by the charismatic and popular Kemal Atatürk they expelled all occupying forces and the nation of Turkey was born.

99% of Turkish people are Muslim and, as you might imagine, many of the customs and traditions of the nation revolve around Islamic thought and traditions. Still, Turkey is not a fundamentalist Islamic state and levels of adherence to the various strictures of Islam vary from region to region. For example: in the large cities it is possible for female visitors to enter a mosque without covering their heads. (Although this is not something a woman would want to do on a regular basis.) This is not the case in more remote areas of the country where Islamic influence is strong. In those areas a woman will need to cover her head and shoulders and wear skirts that extend below the knee.

One of Atatürk’s most controversial reforms was to abolish the caliphate that had formerly given the Ottoman sultans nominal authority over all Muslims worldwide. Atatürk also restricted the power and influence of religious authorities and greatly reduced religious teaching in schools. He also introduced the Latin alphabet along with Western painting, literature and even opera. Painting of figures; a practice normally discouraged by Islamic tradition, was allowed and musicians were encouraged to embrace many Western musical forms including jazz (Turkish Jazz Week is a highlight of the cultural calendar each year) and the aforementioned opera.

Turkish literature came late to Western forms like the novel but has produced some incredibly nuanced and important work. Many Turkish writers today write about the country’s downtrodden or outcast and many embrace the Western notion of progress from both a social and individual perspective.

The rich heritage and complexity of Turkish culture is perhaps best personified by Turkish folkloric dance. Turkish folk dance is not a single style of dance but rather a tapestry of different dances that vary from region to region with each incorporating its own subtleties and cultural associations. From the “Haly” and “Bar” in the East to the “Hora” in Thrace and the “Horon” in the Black Sea region Turkish folk dance exhibits an amazing diversity of expression and movement and is regarded by many as one of the most important cultural legacies of the Turkish nation.

Turkey has a well-deserved reputation for producing some of the world’s most beautiful and evocative handicrafts. From embroiderers to silversmiths to weavers and more the craftsmen and women of Turkey have been perfecting their various trades for more than 2 millennia and their work is just as vibrant and rich today as it was in the days of Byzantium and Anatolia. At Paykoc Imports we take great pride in the role we play in bringing dazzling Turkish handicrafts to both the US and online audience. In this post we’ll look at some of the most important and timeless handicrafts being created in Turkey today. 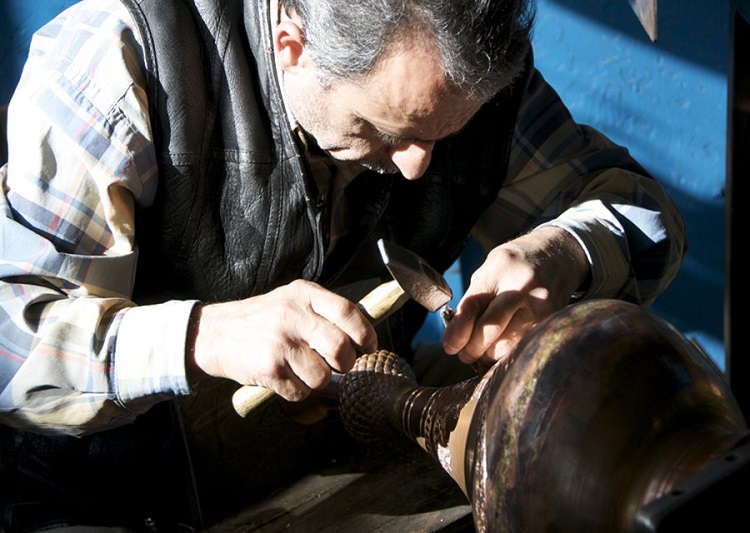 Working independently over the centuries in workshops scattered across Asia Minor the Turks and their ancestors have handcrafted a cultural tradition unlike any other. Through an insistence on maintaining the tried and true methodologies of their forebears the timeless qualities of a more elegant age are still with us today in Turkish handicrafts. Some of the most important of these include:

Turkish traditional handicrafts are a major draw for visitors from around the world. Unlike some countries whose markets are likely to be stuffed with the same half dozen or so t-shirts and tiny plastic trinkets stamped out by the millions Turkey’s public markets are alive with items of dazzling handcrafted quality. These items are a vivid reminder of the value of patient effort that speak to us even more intimately in our age of profit-driven, planned obsolescence.

At Paykoc Imports we’re proud to celebrate and promote world-renowned Turkish handicrafts. From Zamak earrings, bracelets and necklaces to meerschaum Turkish peddlar pipes to stunning Turkish mosaic lamps and the exquisite porcelain creations Nimet Varli. We encourage you to browse our online collections or pay us a visit in our Denver showroom.